Lessons-Learned From Counter-Protestors in Texas 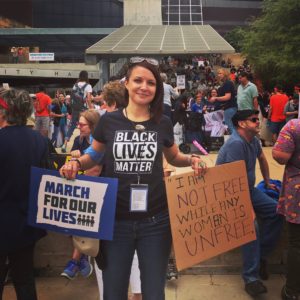 Tears filled my eyes as I heard kids asking their parents questions like “why don’t they understand guns are bad, mommy?” I laced up my shoes and grabbed my signs (equipped with my favorite Audre Lorde quote “I am not free while any woman is unfree, (+ on the back) even when her shackles are very different from my own.”

I had been trained as a crowd safety volunteer by a self-defense expert a few days prior.

“Hey Rachel. We’ve got counter-protesters on the corner. You got this, right?”

I nodded my head and said “I guess so…” nonverbally.

“Great–go ahead and stand on that corner. Just do like we practiced and make sure to keep things peaceful”

I asked my new volunteer-bestie, Charlotte, if she’d accompany me, and she immediately said “of course.”

We looked up and saw rifles and handguns strapped to their bodies like suspenders and badges of honor.

I’ve never seen anything like it. I grew up in Texas, but after nearly 12 years in the Bay Area, my eyes were wide.

We were encouraged not to engage. So I stood tall, with my blue band strapped to my right arm, which signaled that I was a “crowd-safety conflict de-escalator” volunteer.

So I stood calmly, as the small crowd of gun-carrying white men grew from one to seven or eight.

They didn’t really say much. Just stood there with their signs, flags, and guns.

I looked to my right and saw (what appeared to be) a highschool student with a black leather jacket and genuine fascination pulsing through his eyes. He stood between the two sides–and occasionally leaned in closer to the counter-protestors. Every once in a while he moved closer to the protesters. It was as if he was holding an imaginary tug-of-war rope…being pulled and swayed back and forth.

I couldn’t help but wonder what was going on, so I said, “Hey, I’m a safety volunteer, and want to make sure we’re all good. Just checking–are you on this side (pointing to the counter-protesters) or that side?”

As I said it a wave of emotion came over my body–Woa, did I just box him in? I paused.

He looked me straight in the eyes, with matter-of-fact wisdom from another generation, and said, “I don’t know yet. I want to make an informed decision, and I’m here to figure out where I stand. I’m a 17 year old Texas high school student who wants to make a decision for myself. I want to hear both sides, so I’m asking both sides questions”

In that instant I felt so many emotions: pride, appreciation, admiration, intrigue.

“I mean, I grew up here with guns, so, on one hand, I can really see where they’re coming from…BUT, on the other hand, I don’t think guns should be in schools…”

I stood there, feeling closer to him than anyone else on that day. I expressed my appreciation for his honesty and genuine reflection. We both stood there processing.

I sighed and said, “I really respect that. Thank you for sharing.”

We chatted a bit more, then based on a major shift in his body-language, in an instant, I could tell that he experienced some clarity.

He looked me right in the eyes and declared, “You know, I think I just answered my own question–I don’t want guns in schools. That doesn’t make any sense” He proceeded to walk with me toward the march.

That instant captured so much of the real, raw, spirit of his generation.

We parted ways, and I wondered if the adults could be as civil, respectful, and thoughtful as he was.

Based on my observations, the counter-protestors loved the attention. They posed. They smiled. They relished.

As a volunteer, I was told that my job was to kindly remind people that we’re here to keep the peace and not engage–because engaging escalates emotion–so that’s what I did. Sometimes that meant distracting people by asking questions, so that’s what I was doing.

Look, I get it. I understood why she was frustrated. Teachers should not be armed. There were so many reasons why i wanted to engage…but I didn’t.

I was shocked that she would add fuel to the fire, so I looked at her. Okay it was more than a look…

My eyes locked with hers and nonverbally said, ”Really? Are we any better if we yell at them? Let’s keep the peace.”

She looked down at the concrete as if she had a tail between her legs.

The sea of people surged and swayed onward.

I had never stood so close to group of men with many many many guns out and open.

People kept trying to engage, (I’d hear “how DARE they…”) and I kept kindly encouraging them to “keep it moving.”

Some people wouldn’t listen, and I kindly tapped them on their shoulder and told them I had a question for them (to distract them before they would get further triggered by the counter-protesters).

“But I’m just genuinely curious…I want to know why they’re here.” (the most common response)

“I hear you, but today is not “deliberate dialogue day.” Today is about protesting. Today we march. We don’t have the right conditions for thoughtful conversations–we can barely hear ourselves talking right now…make sense?”

Inevitably they’d come to their senses and sigh, marching on.

I’d always end with: “believe me I’d love to talk about how we can better build bridges and engage across difference–but today isn’t the day.”

I felt the tug-of-war.

Here was the fascinating finale…

I heard a counter-protester respond to a question with “We’re here to protect civilians.”

Wait what? Did he really just say that, with a sign tied around his neck that says “arm teachers”? He genuinely believes he’s here to protect US? The streets were lined with police and DPS officers.

Then I overheard him say he was a father.

That was the moment I felt something different. Here he was, doing the best that he could with the tools that he had.

In some ways, the two sides are no different. We’re all sponges in some respect. We’ve all absorbed information, values, beliefs, and then done our best to make sense of it all, given our experiences in the world.

We’re all somebody’s child. We all have some connection to the next generation.

We’ve all experienced pain and fear. We’re all trying to cope with that pain.

If only there were more opportunities to engage, connect, and share…

As I reflect back on that day, if I had to sum up the 3 biggest lessons-learned I’d say:

So I’ll urge us ALL–myself included–to keep reflecting on what it means to be self-aware and emotionally grounded during times of uncertainty and chaos.

The SPARK acronym can help us with that…. 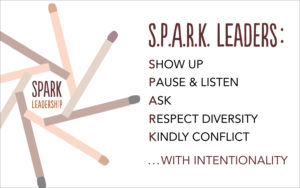 This looks, feels, and sounds differently for us all, and I go in-depth in my courses and in our virtual gathering space.

And, for those who are interested in boosting their emotional intelligence, I wrote more about how to do that this blog recently.

SO, I’m curious to hear…

What does this spark for you? What reactions or questions does it raise?

With love. For justice. 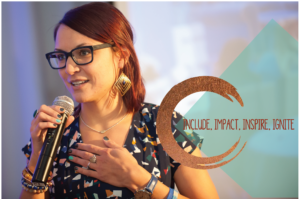 Rachel Rosen, the founder of S.P.A.R.K. Community and S.P.A.R.K. Leadership, is on a mission to start a global conversation about inclusion, courageous leadership, and racial equity. With a Masters from Stanford, and extensive training in leadership, coaching, organizational development, S.P.A.R.K. experiences are grounded in theory and practice–all in service of making the world a better place. With love. For justice. Learn more about your SPARK Leadership status here.